Memorise: “He caused an east wind to blow in the heaven: and by his power he brought in the south wind.” – Psalm 78:26

21 And Moses stretched out his hand over the sea; and the LORD caused the sea to go back by a strong east wind all that night, and made the sea dry land, and the waters were divided.

22 And the children of Israel went into the midst of the sea upon the dry ground: and the waters were a wall unto them on their right hand, and on their left.

23 And the Egyptians pursued, and went in after them to the midst of the sea, even all Pharaoh’s horses, his chariots, and his horsemen.

25 And took off their chariot wheels, that they drave them heavily: so that the Egyptians said, Let us flee from the face of Israel; for the LORD fighteth for them against the Egyptians.

26 And the LORD said unto Moses, Stretch out thine hand over the sea, that the waters may come again upon the Egyptians, upon their chariots, and upon their horsemen.

27 And Moses stretched forth his hand over the sea, and the sea returned to his strength when the morning appeared; and the Egyptians fled against it; and the LORD overthrew the Egyptians in the midst of the sea.

28 And the waters returned, and covered the chariots, and the horsemen, and all the host of Pharaoh that came into the sea after them; there remained not so much as one of them.

The Holy Spirit can blow like a mighty rushing wind as recorded in Acts 2:1-4. Occasionally, the Holy Spirit has to move speedily to intervene, especially when things are about to get out of hand, just as in Judges 15:14:

“And when he came unto Lehi, the Philistines shouted against him: and the Spirit of the LORD came mightily upon him, and the cords that were upon his arms became as flax that was burnt with fire, and his bands loosed from off his hands.”

When an urgent miracle is needed, the Holy Spirit moves speedily. Whenever you need the Holy Spirit to move speedily, speak His language. As you build momentum speaking in tongues, the wind of the Holy Spirit and His power will begin to build up within you. When you have felt the wind and power strongly within you, let it out by speaking a word into that situation and you will see changes.

However, do not wait for a dangerous situation before you begin to call upon the Holy Spirit to move speedily. Many times, when challenges come, they don’t give enough time for speaking in tongues. Make speaking in tongues a lifestyle. Speak in tongues for at least one hour every day. Build up the wind of the Holy Spirit in your inner man so frequently and fervently that every word that comes out of your mouth is fire. When a man of God speaks to situations in public and things begin to change, that man must have spent time building up the wind of the Holy Spirit in himself privately.

Make time to speak in tongues for at least one hour today.

1 All hail the pow’r of Jesus’ Name!
Let angels prostrate fall;
Bring forth the royal diadem,
And crown Him Lord of all!

2 Ye chosen seed of Israel’s race,
Ye ransomed from the fall,
Hail Him Who saves you by His grace,
And crown Him Lord of all!

3 Let every kindred, every tribe,
On this terrestrial ball,
To Him all majesty ascribe,
And crown Him Lord of all!

4 Oh, that with yonder sacred throng
We at His feet may fall!
We’ll join the everlasting song,
And crown Him Lord of all! 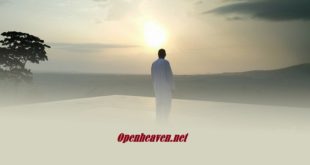 RCCG MAY 2020 DIVINE ENCOUNTER “LET THERE BE LIGHT 5” BY: PASTOR E.A. ADEBOYE 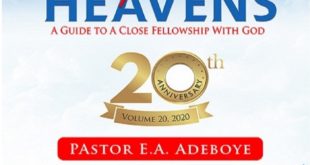 Welcome to the RCCG Family!!

Want to be the first one to receive Daily Open Heaven and updates from RCCG Worldwide?

Enter your email address below and we'll send it to you daily straight to your inbox.

Welcome to the Redeemed Family!!

You are blessed in Jesus Name

Spamming is not included! Pinky promise.