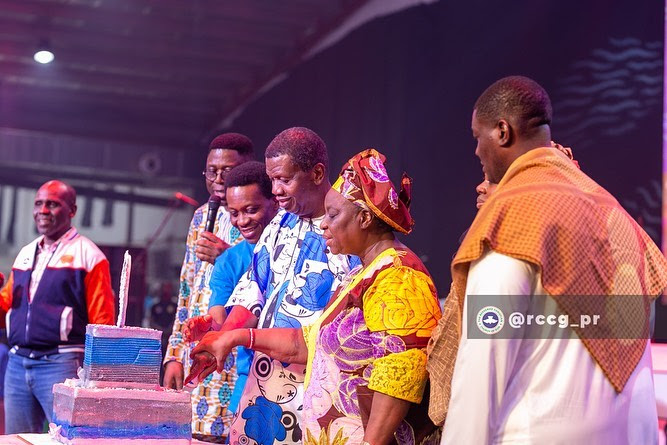 Your Family, Friends And People All Over The World Will Come Together In One Voice To Celebrate You In JESUS Name…… “Amen”

Memorise: “And when they began to sing and to praise, the LORD set ambushments against the children of Ammon, Moab, and mount Seir, which were come against Judah; and they were smitten.” – 2 Chronicles 20:22

2 Then there came some that told Jehoshaphat, saying, There cometh a great multitude against thee from beyond the sea on this side Syria; and, behold, they be in Hazazontamar, which is Engedi.

3 And Jehoshaphat feared, and set himself to seek the LORD, and proclaimed a fast throughout all Judah.

4 And Judah gathered themselves together, to ask help of the LORD: even out of all the cities of Judah they came to seek the LORD.

5 And Jehoshaphat stood in the congregation of Judah and Jerusalem, in the house of the LORD, before the new court,

6 And said, O LORD God of our fathers, art not thou God in heaven? and rulest not thou over all the kingdoms of the heathen? and in thine hand is there not power and might, so that none is able to withstand thee?

7 Art not thou our God, who didst drive out the inhabitants of this land before thy people Israel, and gavest it to the seed of Abraham thy friend for ever?

8 And they dwelt therein, and have built thee a sanctuary therein for thy name, saying,

9 If, when evil cometh upon us, as the sword, judgment, or pestilence, or famine, we stand before this house, and in thy presence, (for thy name is in this house,) and cry unto thee in our affliction, then thou wilt hear and help.

10 And now, behold, the children of Ammon and Moab and mount Seir, whom thou wouldest not let Israel invade, when they came out of the land of Egypt, but they turned from them, and destroyed them not;

11 Behold, I say, how they reward us, to come to cast us out of thy possession, which thou hast given us to inherit.

12 O our God, wilt thou not judge them? for we have no might against this great company that cometh against us; neither know we what to do: but our eyes are upon thee.

13 And all Judah stood before the LORD, with their little ones, their wives, and their children.

15 And he said, Hearken ye, all Judah, and ye inhabitants of Jerusalem, and thou king Jehoshaphat, Thus saith the LORD unto you, Be not afraid nor dismayed by reason of this great multitude; for the battle is not yours, but God’s.

16 To morrow go ye down against them: behold, they come up by the cliff of Ziz; and ye shall find them at the end of the brook, before the wilderness of Jeruel.

17 Ye shall not need to fight in this battle: set yourselves, stand ye still, and see the salvation of the LORD with you, O Judah and Jerusalem: fear not, nor be dismayed; to morrow go out against them: for the LORD will be with you.

18 And Jehoshaphat bowed his head with his face to the ground: and all Judah and the inhabitants of Jerusalem fell before the LORD, worshipping the LORD.

20 And they rose early in the morning, and went forth into the wilderness of Tekoa: and as they went forth, Jehoshaphat stood and said, Hear me, O Judah, and ye inhabitants of Jerusalem; Believe in the LORD your God, so shall ye be established; believe his prophets, so shall ye prosper.

21 And when he had consulted with the people, he appointed singers unto the LORD, and that should praise the beauty of holiness, as they went out before the army, and to say, Praise the LORD; for his mercy endureth for ever.

22 And when they began to sing and to praise, the LORD set ambushments against the children of Ammon, Moab, and mount Seir, which were come against Judah; and they were smitten.

24 And when Judah came toward the watch tower in the wilderness, they looked unto the multitude, and, behold, they were dead bodies fallen to the earth, and none escaped.

25 And when Jehoshaphat and his people came to take away the spoil of them, they found among them in abundance both riches with the dead bodies, and precious jewels, which they stripped off for themselves, more than they could carry away: and they were three days in gathering of the spoil, it was so much.

We are always engaged in battles and the greatest weapon of our warfare apart from holiness is praise. When you are going to war against odds that are far too great for you, the only way to win is by praising God. That was the strategy of Jehoshaphat. He knew that there was no way he could have defeated three great kings, so instead of calling a meeting with the general of his army to plot strategies, he went to God in praise.

“And said, O LORD God of our fathers, art not thou God in heaven? and rulest not thou over all the kingdoms of the heathen? and in thine hand is there not power and might, so that none is able to withstand thee?” – 2 Chronicles 20:6

These were Jehoshaphat’s words to the Most High God. There is no way God would hear such words of praise from His child and not pay attention to the fellow. When Jehoshaphat was through, God told him: Don’t worry boy, I will fight this battle Myself. When you pray, you fight your battles, but when you praise, God fights for you. On the day of the battle, Jehoshaphat appointed singers, not soldiers to go to the battle field. Today’s memory verse says:

“And when they began to sing and to praise, the LORD set ambushments against the children of Ammon, Moab, and mount Seir, which were come against Judah; and they were smitten.”

By the time they got to the battlefield all their enemies were already destroyed; all they had to do was to take the spoils of war. As you sing and praise God henceforth, all your enemies will be destroyed.

If you have already been captured by the enemy, put in prison and bound, the only way to get out is by praise. If you don’t believe me, ask Paul and Silas (Acts 16:25-34). When you are in any impossible situation, deploy the weapon of praise. Praise has never failed me before. It will not fail you either, in the mighty name of Jesus.

With praise as your weapon of warfare, there is no enemy too great for you to conquer.


1 Let us, with a gladsome mind,
praise the Lord for he is kind:
for his mercies shall endure,
ever faithful, ever sure.

2 Let us sound his name abroad,
for of gods he is the God:
for his mercies shall endure,
ever faithful, ever sure.

3 He with all-commanding might
filled the new-made world with light:
for his mercies shall endure,
ever faithful, ever sure.

4 All things living he doth feed;
his full hand supplies their need:
for his mercies shall endure,
ever faithful, ever sure.

5 Let us then, with glad-some mind,
praise the Lord for he is kind:
for his mercies shall endure,
ever faithful, ever sure.

Sunday Open Heavens 3 July 2022 TO DO AND TO TEACH