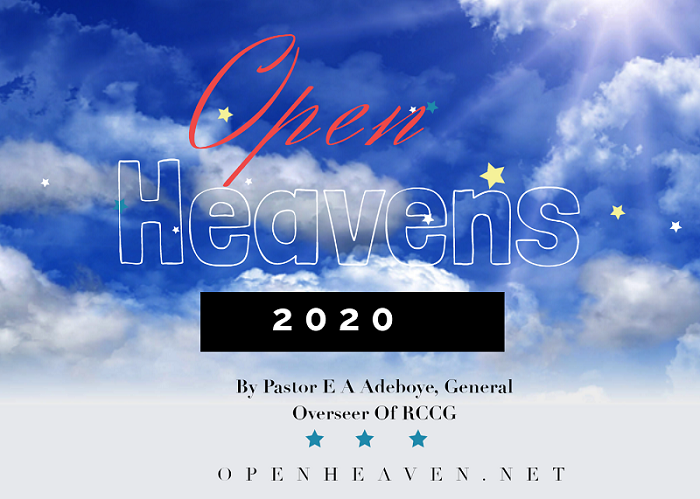 Memorise: Be not deceived; God is not mocked: for whatsoever a man soweth, that shall he also reap. Galatians 6:7

Read: Galatians 6:4-5 (KJV)
4 But let every man prove his own work, and then shall he have rejoicing in himself alone, and not in another.
5 For every man shall bear his own burden.

Message:-
God has principles and even He abides by them. For example, His principles is that for the cleansing of sins, there must be the shedding of unpolluted blood, so when the blood of animals was not enough to take away sins, He did not change the principle; rather He sent His own Son (which was a great sacrifice) who was completely unpolluted to shed His blood for our sins (Hebrews 9:13, 10:12). This is why I wonder how people do things contrary to the principles of God, yet expect good results. If God, in His sovereignty abides by His own principles, then we ought to also.

Open Heaven for Today 26 March 2020] – God’s Principles
One of His principles is that if you don’t work, you will not eat (2nd Thessalonians 3:10). So, when a lazy fellow is asking for a breakthrough, I wonder if he expects God to just drop the money into his lap. If you want to be wealthy, then you have to be willing to work and work hard. Another principle of wealth that God has laid down is the principle of giving. Do you know that even herbalists use this principle and it works? Yes, because God’s principles are universal; whoever obeys them will reap the fruits. The reason many Christians are still in poverty is simply because they do not give. Luke 6:38 says:

Open Heaven for Today 26 March 2020: [Thursday] – God’s Principles
“Give, and it shall be given unto you; good measures, pressed down, and shaken together, and running over, shall men give into your bosom. For with the same measure that ye mete withal it shall be measured to you again.”

One general principles of God is that whatsoever you sow is what you will reap (Galatians 6:7). This means that if you want kindness, show kindness to other. If you want help, help others. There are so many prayers that will not be answered until we begin to work in line with God’s principles. His word is yea and amen; you cannot use prayers to cajole His into going against His word. Do the right thing!

Prayer Point:
When you want something from God, check what His word says about it, then obey.
Open Heavens Daily Devotional Lessons was written by Pastor E.A. Adeboye, the General Overseer of the Redeemed Christian Church of God, one of the largest evangelical Churches in the world and also the President of Christ the Redeemer’s Ministries.

16 And the lot of the children of Joseph fell from Jordan by Jericho, unto the water of Jericho on the east, to the wilderness that goeth up from Jericho throughout mount Bethel,

2 And goeth out from Bethel to Luz, and passeth along unto the borders of Archi to Ataroth,

4 So the children of Joseph, Manasseh and Ephraim, took their inheritance.

7 And it went down from Janohah to Ataroth, and to Naarath, and came to Jericho, and went out at Jordan.

8 The border went out from Tappuah westward unto the river Kanah; and the goings out thereof were at the sea. This is the inheritance of the tribe of the children of Ephraim by their families.

5 And there fell ten portions to Manasseh, beside the land of Gilead and Bashan, which were on the other side Jordan;

6 Because the daughters of Manasseh had an inheritance among his sons: and the rest of Manasseh’s sons had the land of Gilead.

7 And the coast of Manasseh was from Asher to Michmethah, that lieth before Shechem; and the border went along on the right hand unto the inhabitants of Entappuah.

8 Now Manasseh had the land of Tappuah: but Tappuah on the border of Manasseh belonged to the children of Ephraim;

10 Southward it was Ephraim’s, and northward it was Manasseh’s, and the sea is his border; and they met together in Asher on the north, and in Issachar on the east.

12 Yet the children of Manasseh could not drive out the inhabitants of those cities; but the Canaanites would dwell in that land.

13 Yet it came to pass, when the children of Israel were waxen strong, that they put the Canaanites to tribute, but did not utterly drive them out.

14 And the children of Joseph spake unto Joshua, saying, Why hast thou given me but one lot and one portion to inherit, seeing I am a great people, forasmuch as the Lord hath blessed me hitherto?

15 And Joshua answered them, If thou be a great people, then get thee up to the wood country, and cut down for thyself there in the land of the Perizzites and of the giants, if mount Ephraim be too narrow for thee.

17 And Joshua spake unto the house of Joseph, even to Ephraim and to Manasseh, saying, Thou art a great people, and hast great power: thou shalt not have one lot only:

18 And the whole congregation of the children of Israel assembled together at Shiloh, and set up the tabernacle of the congregation there. And the land was subdued before them.

2 And there remained among the children of Israel seven tribes, which had not yet received their inheritance.

3 And Joshua said unto the children of Israel, How long are ye slack to go to possess the land, which the Lord God of your fathers hath given you?

4 Give out from among you three men for each tribe: and I will send them, and they shall rise, and go through the land, and describe it according to the inheritance of them; and they shall come again to me.

6 Ye shall therefore describe the land into seven parts, and bring the description hither to me, that I may cast lots for you here before the Lord our God.

8 And the men arose, and went away: and Joshua charged them that went to describe the land, saying, Go and walk through the land, and describe it, and come again to me, that I may here cast lots for you before the Lord in Shiloh.

9 And the men went and passed through the land, and described it by cities into seven parts in a book, and came again to Joshua to the host at Shiloh.

10 And Joshua cast lots for them in Shiloh before the Lord: and there Joshua divided the land unto the children of Israel according to their divisions.

13 And the border went over from thence toward Luz, to the side of Luz, which is Bethel, southward; and the border descended to Atarothadar, near the hill that lieth on the south side of the nether Bethhoron.

14 And the border was drawn thence, and compassed the corner of the sea southward, from the hill that lieth before Bethhoron southward; and the goings out thereof were at Kirjathbaal, which is Kirjathjearim, a city of the children of Judah: this was the west quarter.

15 And the south quarter was from the end of Kirjathjearim, and the border went out on the west, and went out to the well of waters of Nephtoah:

18 And passed along toward the side over against Arabah northward, and went down unto Arabah:

19 And the border passed along to the side of Bethhoglah northward: and the outgoings of the border were at the north bay of the salt sea at the south end of Jordan: this was the south coast.

20 And Jordan was the border of it on the east side. This was the inheritance of the children of Benjamin, by the coasts thereof round about, according to their families.


21 Now the cities of the tribe of the children of Benjamin according to their families were Jericho, and Bethhoglah, and the valley of Keziz,

24 And Chepharhaammonai, and Ophni, and Gaba; twelve cities with their villages:

25 Gibeon, and Ramah, and Beeroth,

26 And Mizpeh, and Chephirah, and Mozah,

28 And Zelah, Eleph, and Jebusi, which is Jerusalem, Gibeath, and Kirjath; fourteen cities with their villages. This is the inheritance of the children of Benjamin according to their families.