Memorize: But he giveth more grace. Wherefore he saith, God resisteth the proud, but giveth grace unto the humble.
James 4:6

Read: Proverbs 16:18 – 18 Pride goeth before destruction, and an haughty spirit before a fall.

Today, we will be considering the element ‘P in the “Mathematics of Christ in You”-MCY (If you do not understand, kindly refer to the devotional of January 11). The element “P in the equation for Resistance stands for Pride. Pride will resist the free flow of Christ in you. Today’s memory verse says God resists the proud but He gives grace to the humble. This means that it is only when pride disappears that the grace of Christ would begin to flow fully in you.
1 Peter 5:6 says:
Humble yourselves therefore under the mighty
Hand of God, that he may exalt you in due time:
Almost as soon as I got born again, I began to hear the voice of the Lord. It was a sweet experience. I was also the interpreter for the then General Superintendent, and so, out of respect for him, other pastors would not ask that l interpret for them. One day, I felt insulted when a junior Pastor asked me to interpret for him I said to myself “I am the interpreter for the big man, how can this Pastor ask me to interpret for him?” I reluctantly accepted because of the culture of discipline in The Redeemed Christian Church of God. As I finished interpreting for him and was going to my car, God asked me “So you are now too big to interpret for my servant?” From that moment, He went silent. Believe me, it is a terrible experience to stop hearing from God. It didn’t take long for the devil to exploit this gap and torment me. I wept bitterly as I prayed “Father, forgive me, I will interpret for anyone”. At last, God forgave me and I began to hear from Him again.

Many years later, after I had become the General Overseer,I travelled to the town of llesha, Nigeria. On getting there, I decided to attend the Bible Study at a nearby RCCG Parish.I wanted to just sit back and enjoy the service, but I was dragged up to the pulpit to teach. I insisted that since the fellow who was to teach had already opened his Bible, he should go ahead and l would interpret. He said he was only a deacon and was quite low in rank to the General Overseer. When the discussion was becoming drawn, I said. I command you”. Since he had no choice, he taught and I interpreted for him. As a worker, I was too proud to interpret for a Pastor, but now as General Overseer I interpreted for a deacon. The measure of Christ I have in me has increased because I have destroyed pride in my life by His grace. Do
You still harbour pride It will hinder Christ from dwelling in your life. Pride must go; it has to die!

Deal with it today and see how much Christ will begin to operate in you.

Action point: Take note of those things you do and thoughts that connote pride in your life. Start shedding them off from today. 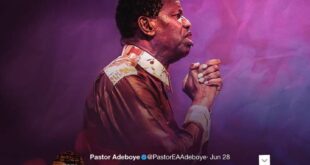 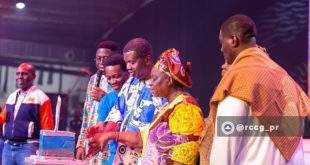 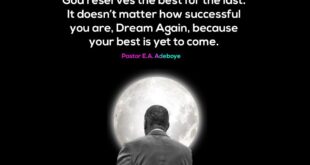