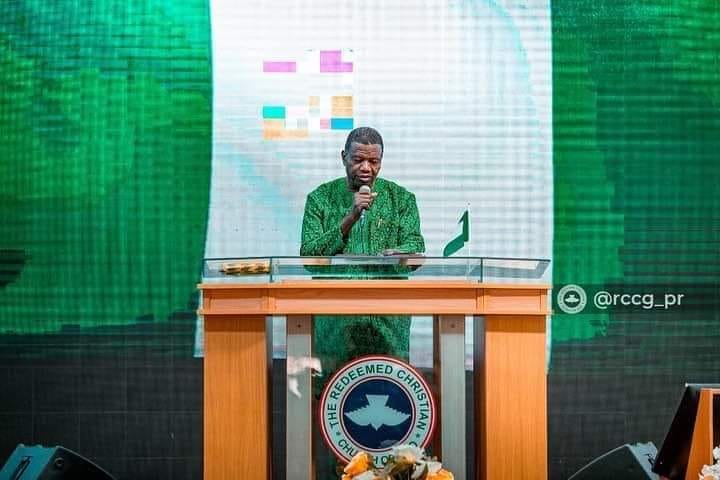 Aura means the distinctive atmosphere or quality that seems to surround and be generated by a Person, Thing, or Place.
Now, to go and Kidnap a Ruler?
But that is about to end – Amen!
In 1 Samuel 17: 1-end; the Bible tells us that Goliath terrorised Israel for forty (40) Days and forty (40) Night. It was so bad that when he gets up in the Morning and he roared, even the King will give into hiding.
But then God got involved and brought a “Small Boy” who with just a Piece of Rock silenced the enemy Permanently.
I don’t know how it is going to happen; but because you came to Church this Morning (or reading now on the Label of DMC): In the Mighty Name of Jesus Christ, very soon all the acts of Terrorism, Banditry, all kinds of evil will come to an end very soon – Amen!
II. When God gets involved in the affairs of a Nation, He will Protect the People from Pandemic.
You say: Where is that in the Bible? – I will show you!
Read Exodus 12: 1-36 – A Pandemic swept through the Land of Egypt and this Particular Pandemic that we are talking about was “Very Selective” – It kills only the First Born (Every First Born in every House was killed by an enemy that they could not see).
But because God has a Hand in the affairs of Israel; not a Single Child from the Nation of Israel died.
I told those of you who came to the RCCG October 2021 Holy Ghost Service (HGS) – I said that when God told me on January 1st 2020 that the whole world is going to behave like a Child in Convulsion – I told everybody.
Of course, I didn’t understand what that meant – I could interpret it several ways: It could be that there will be Earthquake over the world or something like that.
… But I just told you the way He told me.
When later on, He said that the whole world will be on “Compulsory Holiday” – I told you.
Then Coronavirus came and the whole world is still Convulsing.
“Compulsory or Public Holiday” came and you can’t believed it – You see the Streets of London, Tokyo, everywhere deserted because God spoke.
And then, there were all kinds of Predictions – Oh, World Health Organisation (WHO), all the Experts; they say: What is going to happen to Africa now? They will be dlying like Chicken.
I even know one of the Pastors or one “Big Man of God” who said: Oh God, before July the People who will be dying in Lagos State Nigeria will be hundreds of thousands.
I said: What have we done? Why will they single me out? – Because I belong here.
I cried to God: Daddy, Please remember that the Elders has a Proverb – The cow that has no tail, it is God who will be chasing away the flies.
… We have no Help but You – Help us!
And He spoke and said: Son, I have heard you. Only those whose time has come will die.
I mean when your time is up, there is nothing anybody can do about that.
And like I told you on Friday – I read not too long ago that the People who died from Snake bite on the average in Nigeria is at least 2,000 a Year – Which means that in 2 Years, 4,000 deaths due to Snake bite.
Now, those of us in Lagos we won’t understand that – You go Upcountry, you will see what their farmers are going through.
Almost 2 Years gone, those who has died by Coronavirus are not up to 3,000 yet. They are less than those killed by Snake bite because there is a God who answers Prayers.
I am decreeing to you right now (or as you read now on the Label of DMC): Coronavirus will not come to your house
III. When God has a Hand in the affairs of a Nation; He can turn the Tides Economically.
If we have a Problem in our Nation now; it has to do with Economics.
Like I said when I was asked to Preach in Abuja last Sunday – During the 61st Independence Anniversary of Nigeria and 45th Christian Association of Nigeria (CAN) Anniversary.

PRAYER FOR SALVATION AND CLOSING PRAYER

Saviour, I want to Thank You for Your Words; I want to give You all the Glory and Honour because of these People who has come forward to surrender their lives to You.
Please remember Your Promise – That whosoever will come unto You, You will no wise cast out.
They have come to You now; Please receive them, have Mercy on them, save their Souls, let Your Blood wash away their sins; Please write their names in the Book of Life and from now on, anytime they cry unto You, answer them by Fire.
And I Pray that they will serve You for the rest of their lives.
Thank You Father!
And now very soon, Your Children will be Praising You and they will be worshipping You – I Pray Lord God Almighty that as they do so; You will get involved with them: Get involve with them Physically, Materially, Maritally and Spiritually.
And Please Lord, because Your Children who are going to be worshipping You today; get involved with Nigeria.
In Jesus Mighty Name we have Prayed – Amen.
Praise the Lord – Hallelujah!
Now, I want to rejoice with those of you who has come forward today.
I want to Promise you that God helping me, I will be Praying for you on a daily basis.
So, I need your name, your Address and your Prayer Request.
And so, if you will turn to your left; you will see someone there like lifting a Placard with Counselling written on it – Follow him, he will take you to where other Counsellors are waiting to get the information that I want.
Let’s clap for them as they go.
Can you Please Stand?
You know that there is a saying that: If your Hallelujah is louder than your neighbour; your Miracles will be Greater than their own.
So, let me hear your Hallelujah – Hallelujah!
I want to appeal to you that even if it is only for five (5) Minutes; worship God like you have never done before.
And you begin to take note that from now on, you will see His Hands in your affairs.
Just go ahead worship the Almighty God – Praise His Holy Name, Praise Him like you have never done before; Give Him Glory, give Him Honour, give Him Adoration. Bless His Holy Name!