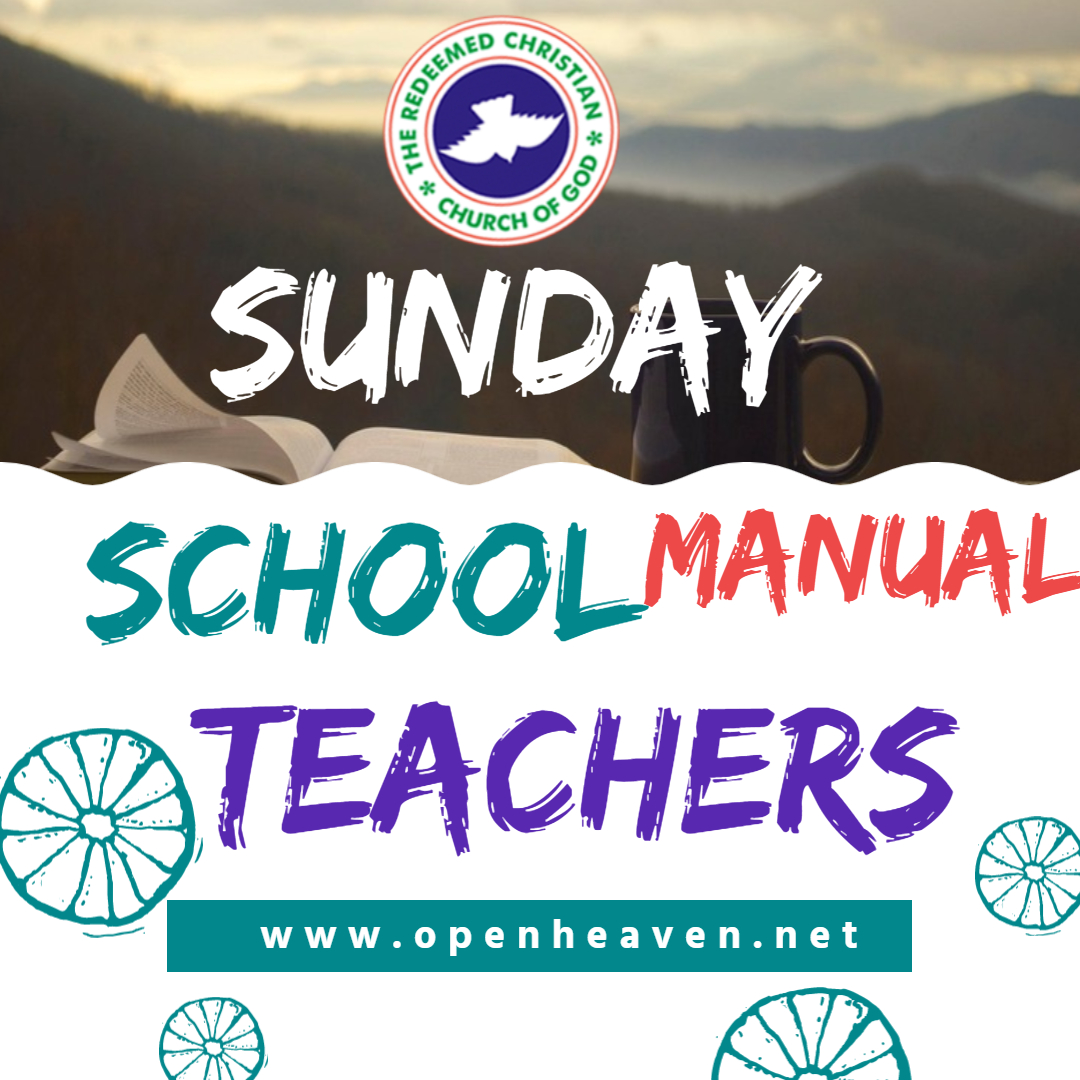 SUNDAY SCHOOL HYMN
1. O Sunday School, on the Lord’s day,
O how I love Thee well,
I am happy, it makes me glad
To rejoice at Thy birth.
2. O Sunday School, on the Lord’s day,
Thy friend friendship suits me well,
Both young and will sing Thy song,
We long for Sunday School.
3. O Sunday School, on the Lord’s day,
Christ was Thy first teacher,
The Holy Spirit, great teacher,
Does manifest in thee.
4. O Sunday School, on the Lord’s day,
This testimony is sure,
That God, the Father Almighty,
Poured His blessing on Thee
5. O Sunday School, on the Lord’s day,
Though the sun be so bright,
Or if the clouds be black with rain,
I’ll be in Sunday School.
6. O Sunday School, on the Lord’s day,
I rejoice to see Thee,
Will thou pass over me today?
Without my being blest?
OPENING PRAYER
Father, make me a Victor. Give me victory over all the wars around me.
MEMORY VERSE: “And Deborah, a prophetess, the wife of Lapidoth, she judged Israel at that time”. — Judges 4:4
BIBLE PASSAGE: JUDGES 4:1-22
Judges:4.1
When Ehud was dead, the children of Israel again did evil in the sight of the LORD.
Judges:4.2
So the LORD sold them into the hand of Jabin king of Canaan, who reigned in Hazor. The commander of his army [was] Sisera, who dwelt in Harosheth Hagoyim.
Judges:4.3
And the children of Israel cried out to the LORD; for Jabin had nine hundred chariots of iron, and for twenty years he harshly oppressed the children of Israel.
Judges:4.4
Now Deborah, a prophetess, the wife of Lapidoth, was judging Israel at that time.
Judges:4.5
And she would sit under the palm tree of Deborah between Ramah and Bethel in the mountains of Ephraim. And the children of Israel came up to her for judgment.
Judges:4.6
Then she sent and called for Barak the son of Abinoam from Kedesh in Naphtali, and said to him, “Has not the LORD God of Israel commanded, ‘Go and deploy [troops] at Mount Tabor; take with you ten thousand men of the sons of Naphtali and of the sons of Zebulun;
Judges:4.7
‘and against you I will deploy Sisera, the commander of Jabin’s army, with his chariots and his multitude at the River Kishon; and I will deliver him into your hand’?”
Judges:4.8
And Barak said to her, “If you will go with me, then I will go; but if you will not go with me, I will not go!”
Judges:4.9
So she said, “I will surely go with you; nevertheless there will be no glory for you in the journey you are taking, for the LORD will sell Sisera into the hand of a woman.” Then Deborah arose and went with Barak to Kedesh.
Judges:4.10
And Barak called Zebulun and Naphtali to Kedesh; he went up with ten thousand men under his command, and Deborah went up with him.
Judges:4.11
Now Heber the Kenite, of the children of Hobab the father-in-law of Moses, had separated himself from the Kenites and pitched his tent near the terebinth tree at Zaanaim, which [is] beside Kedesh.
Judges:4.12
And they reported to Sisera that Barak the son of Abinoam had gone up to Mount Tabor.
Judges:4.13
So Sisera gathered together all his chariots, nine hundred chariots of iron, and all the people who [were] with him, from Harosheth Hagoyim to the River Kishon.
Judges:4.14
Then Deborah said to Barak, “Up! For this [is] the day in which the LORD has delivered Sisera into your hand. Has not the LORD gone out before you?” So Barak went down from Mount Tabor with ten thousand men following him.
Judges:4.15
And the LORD routed Sisera and all [his] chariots and all [his] army with the edge of the sword before Barak; and Sisera alighted from [his] chariot and fled away on foot.
Judges:4.16
But Barak pursued the chariots and the army as far as Harosheth Hagoyim, and all the army of Sisera fell by the edge of the sword; not a man was left.
Judges:4.17
However, Sisera had fled away on foot to the tent of Jael, the wife of Heber the Kenite; for [there was] peace between Jabin king of Hazor and the house of Heber the Kenite.
Judges:4.18
And Jael went out to meet Sisera, and said to him, “Turn aside, my lord, turn aside to me; do not fear.” And when he had turned aside with her into the tent, she covered him with a blanket.
Judges:4.19
Then he said to her, “Please give me a little water to drink, for I am thirsty.” So she opened a jug of milk, gave him a drink, and covered him.
Judges:4.20
And he said to her, “Stand at the door of the tent, and if any man comes and inquires of you, and says, ‘Is there any man here?’ you shall say, ‘No.’ ”
Judges:4.21
Then Jael, Heber’s wife, took a tent peg and took a hammer in her hand, and went softly to him and drove the peg into his temple, and it went down into the ground; for he was fast asleep and weary. So he died.
Judges:4.22
And then, as Barak pursued Sisera, Jael came out to meet him, and said to him, “Come, I will show you the man whom you seek.” And when he went into her [tent,] there lay Sisera, dead with the peg in his temple.
INTRODUCTION
Deborah, the wife of a man called Lapidoth was a prophetess and a judge of Israel. She lived in the 12th century BC and held her court under a tree called “the palm of Deborah” in Ephraim. Deborah’s story is found in Judges, chapter 4 and 5. Her story emphasizes God’s willingness to use men and women alike.


TEXT REVIEW: JUDGES 4:1-22
Deborah was a wife, a prophetess a judge. Judges 4:1
Identify any five characters, lifestyles and achievements of Deborah.
i. ……………..
ii. ………………
iii. ……………….
iv. …………………
v. ……………………
LESSON OUTLINES
1. CHARACTER AND ACHIEVEMENT
2. LESSONS FROM DEBORAH’S LIFE
CHARACTER AND ACHIEVEMENT
Question:
How can you describe Deborah from the biblical point of view?
Answer:
i. She was a woman of faith with deep confidence in the lord’s ability to give victory Judges 4:6-7, Psalm 118:9.
ii She was an open, fair and impartial judge. Judging under a palm tree was a Jewish or Robbie tradition which indicate fairness and openness Judges 4:5
iii She was a great leader who was willing to accompany a fearful Captain to the battle front. Judges 4:9
iv. She understood her prophetic Callings and was directed to deliver the prophetic message without fear. Judges 4:7-9
Question:
How would you describe the tenure/administration of Deborah as a judge and prophet?
Answer:
Very exceptional and successful because:
i. She combined the office of the executive with that of judiciary and a prophetess with that of a wife. The feat which no other person attained in the Bible, Judges 4:4-9.
ii. She lead Israelites when the people were under the oppression of Jabin, the King of Cannan who ruled with iron hands for twenty years Judges 4:2-3.
iii. Her Administration witnessed unprecedented victory and liberation from all manners of oppression Judges 4:16
iv. Her administration witness dominion over the mighty
v. There was unity of purpose among the arms of government as the military cooperated with the civilians to fight common enemies Judges 4:17-23.
vi. There was peace and prosperity during her administration Judges 4:23-24.
Question:
Describe Deborah’s attitude to victory and worship?
Answer:
i. She attributed her victory to God not gods or men Judges 5:3-5.
ii She was a worshiper and a song writer/singer who gave praises to God. Judges 5:1,5
iii. She was a mother in Israel Judges 5:7
NOTE: There is no need for class Activity 1 because all students must have made meaningful contributions to attract 10marks.
LESSONS FROM DEBORAH’S LIFE
Question:
What lessons can believers learn from the life of Deborah?
Answer:
i. Absolute faith in God to take risk when people are afraid to take such risk (Judges 4:8-9)
ii. If God gives us assignments (responsibilities), He will give us ability to execute them. (Judges 4:10,14).
iii. If God gives us an assignment and we turn it down, He will find an alternative person who will accomplish the assignment (Judges 4:16, 21-22).
iv. Whenever God’s work is done in His own way, there would be songs of praises and victory after such assignment (Judges 5:3-5)
v. God always used unlikely people or vessels to accomplish a great task. For instance, He used a woman and a “lent nail” to kill a warlord who had terrorised the land for twenty years. (Judges 4:21, 17; 1Corinthians 1:27).
vi. Whenever the power of God descends on weak vessels, such vessel becomes very strong. (Isaiah 61:1-3)
vii. Whether the horse or chariot is weak or strong, safety (victory) is of the Lord.
SUMMARY
Believers have so much to learn from a woman who would not accept fear, intimidation and other factors to limit her from leading God’s people to victory. Not awaking to God’s service would limit the ability of God.
CONCLUSION
God is willing to use you if you make yourself available.
CLOSING PRAYER
Father, make me very strong for your assignments
ASSIGNMENT
mention five things which Deborah did that gave her victory and which if applied by our leaders today would give them excellent administration. 2 marks for each point.